Me and two other BCMCers went to attempt the Golden Ears–Blanshard Needle Traverse. As a matter of caution I decided to do the trip in two days, which in retrospect is a much saner option. On Saturday, we hiked up the West Canyon trail and basked in the boiling sun. We had a nice, late start at about 9:30 and got up to the hut around 14:00–14:30. We decided to climb Golden Ears that afternoon and then returned to the shelter for the night. The shelter has seen better days and there are currently a good number of mice in the area. It would probably be best to camp a little distance away from the shelter. 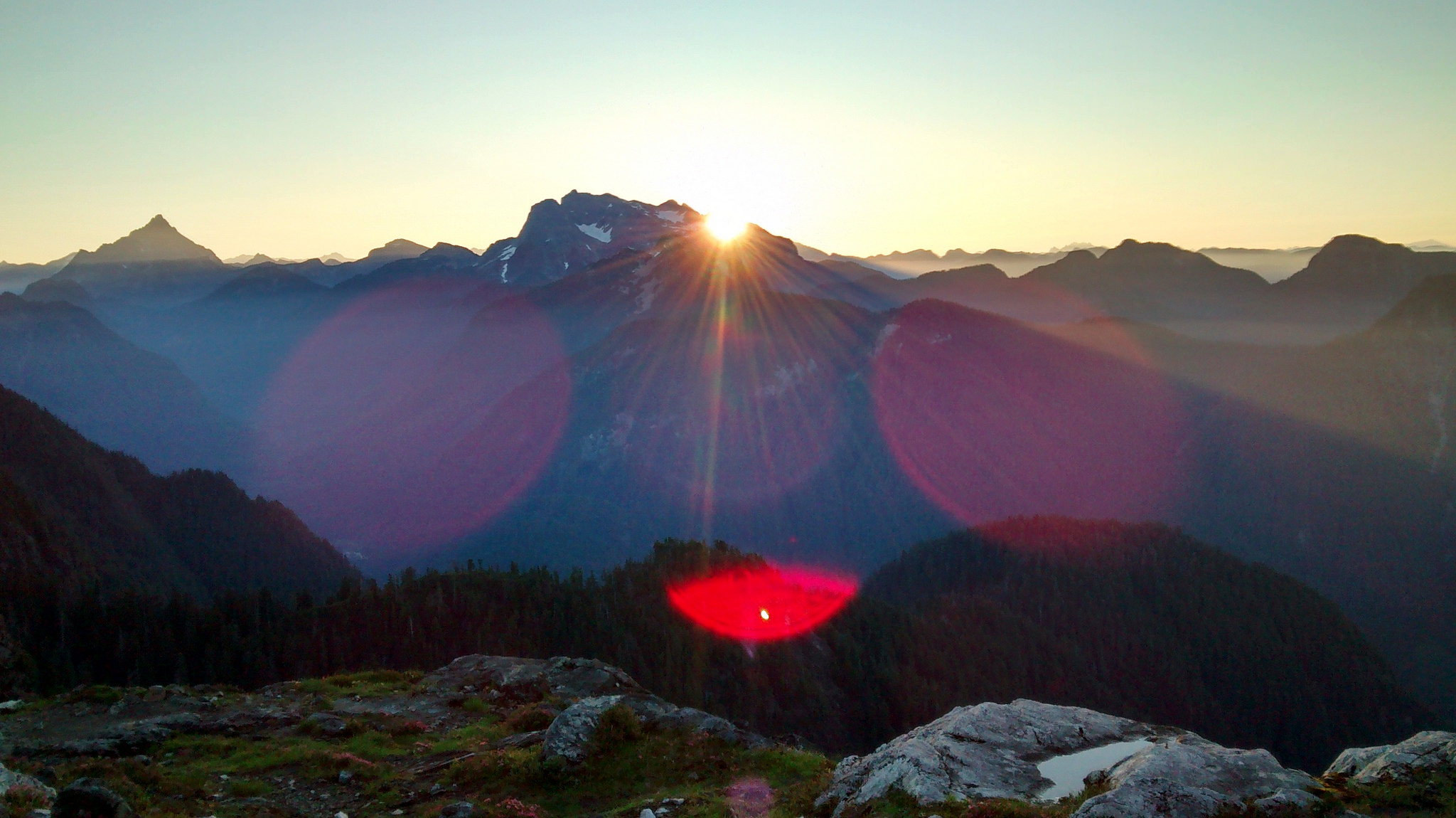 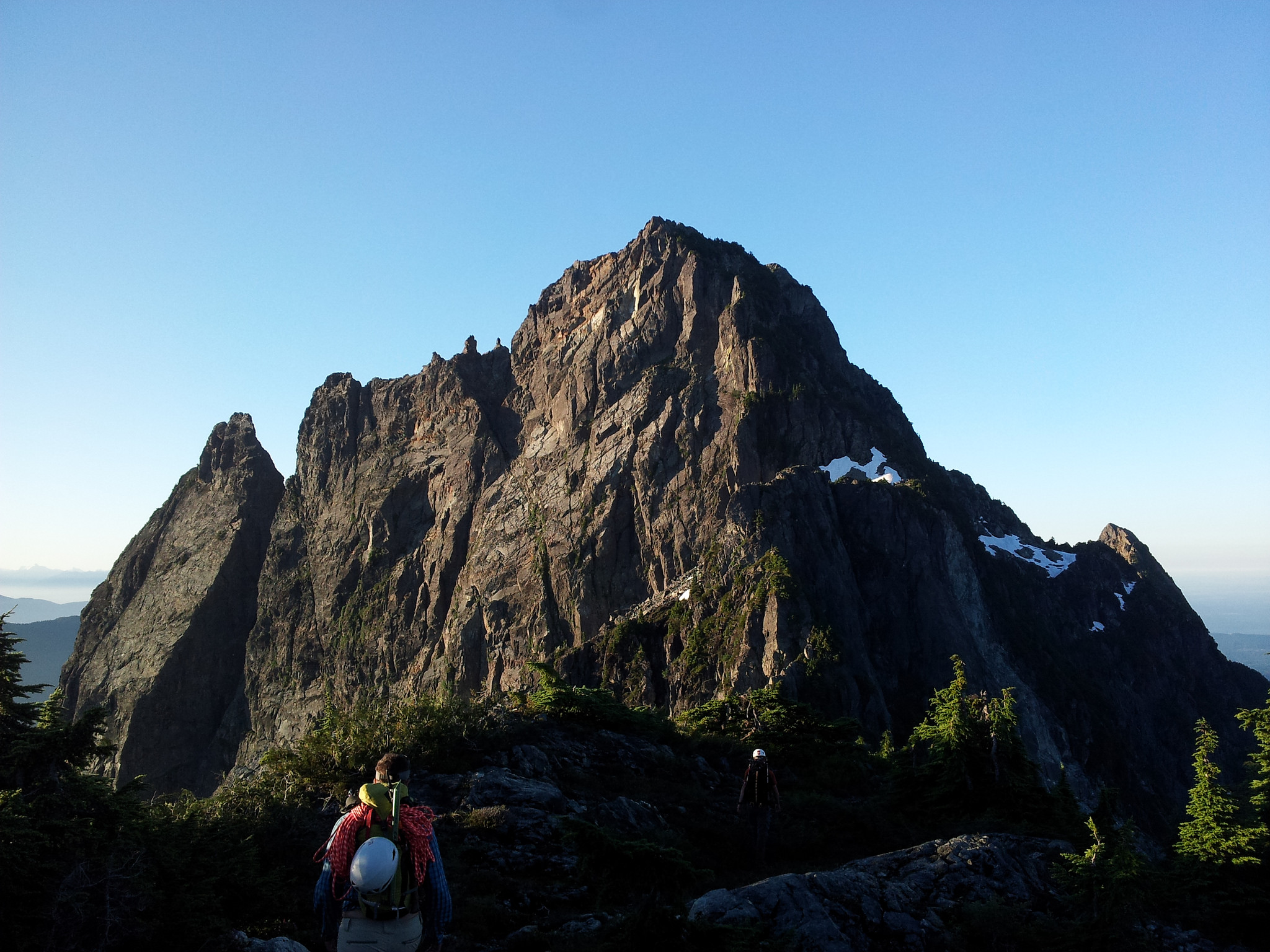 On Sunday we wake up, pack our bags and head out about 6am. The hike gets into scramble and bushwack territory pretty quickly. We scrambled around a bit before we came up to a 15 meter-or-so vertical wall which we assume is the one mentioned in the route description on this site. 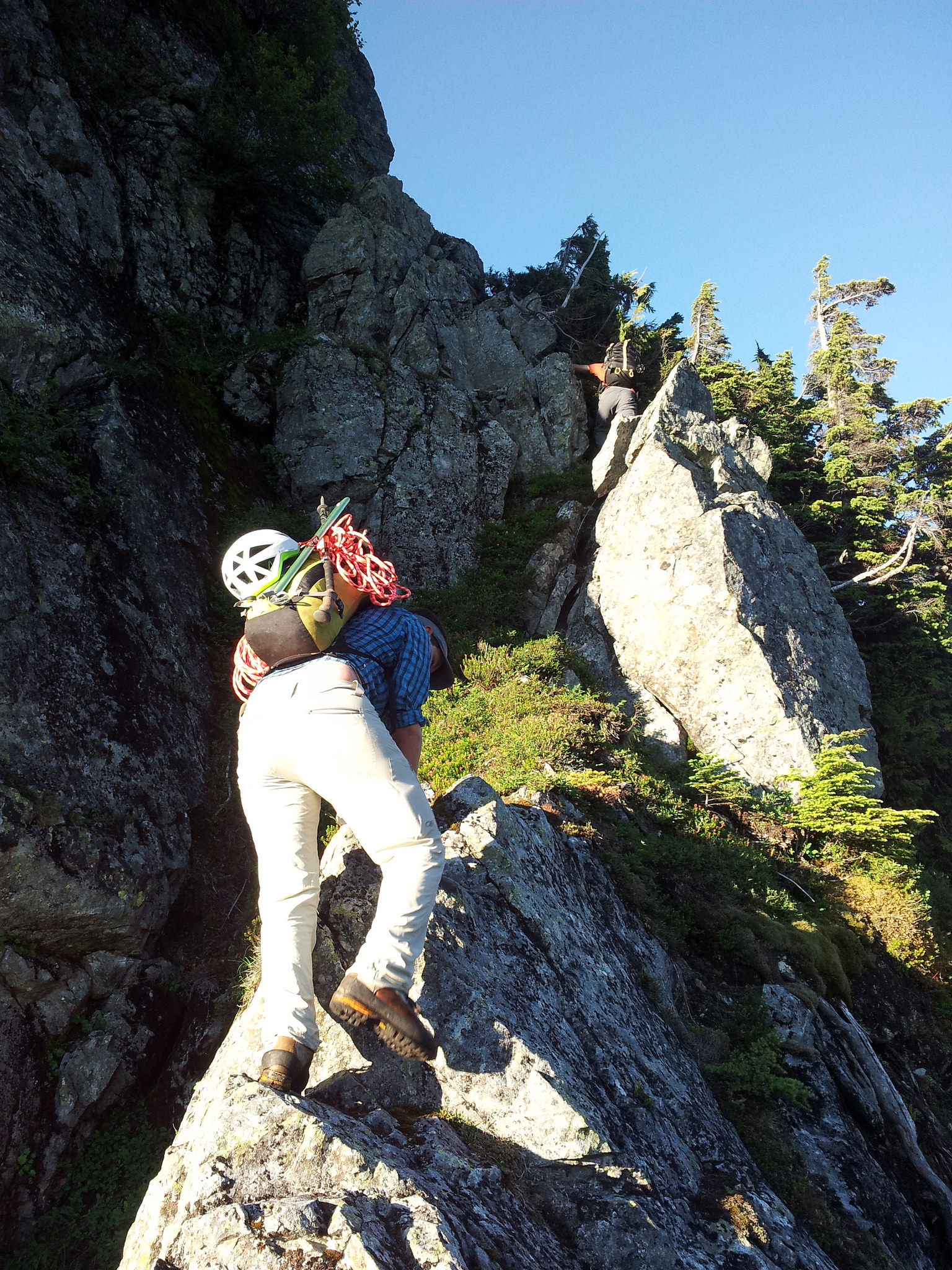 Easy scrambling at the start. The harder climbing does not get any photos on account of being too runout.

I think we may have ended up slightly off-route at this point, since the climbing was harder than I expected. Pitch 1 was a small, airy traverse to the left onto a large platform (10m). Pitch 2 went up a ramp to the right and back out on the face we previously looked at, and over the top of the wall. Lots of hard-to-protect conglomerate (5.6+ PG13, 20m). Pitch 3 climbed up another short wall via a nice chimney (easy 5th, 12m).

Once that was finished, the rout up the north-west side of Edge was easy to pick out and we scrambled up it. Of particular note was the large quantity of gravel and loose rock on the route.

The next bit heading south from Edge has some superb scrambling. Unfortunately, all good things come to an end (and on this route, with great speed). We shortly found ourselves in a bushy, narrow, notch, with steep drops on both sides. It is unclear whether a rappel down the gulley to the west would have worked here, but we continued on. We did another 10 meter pitch climbing along and up some exposed trees (there was a little rock too, honest!) 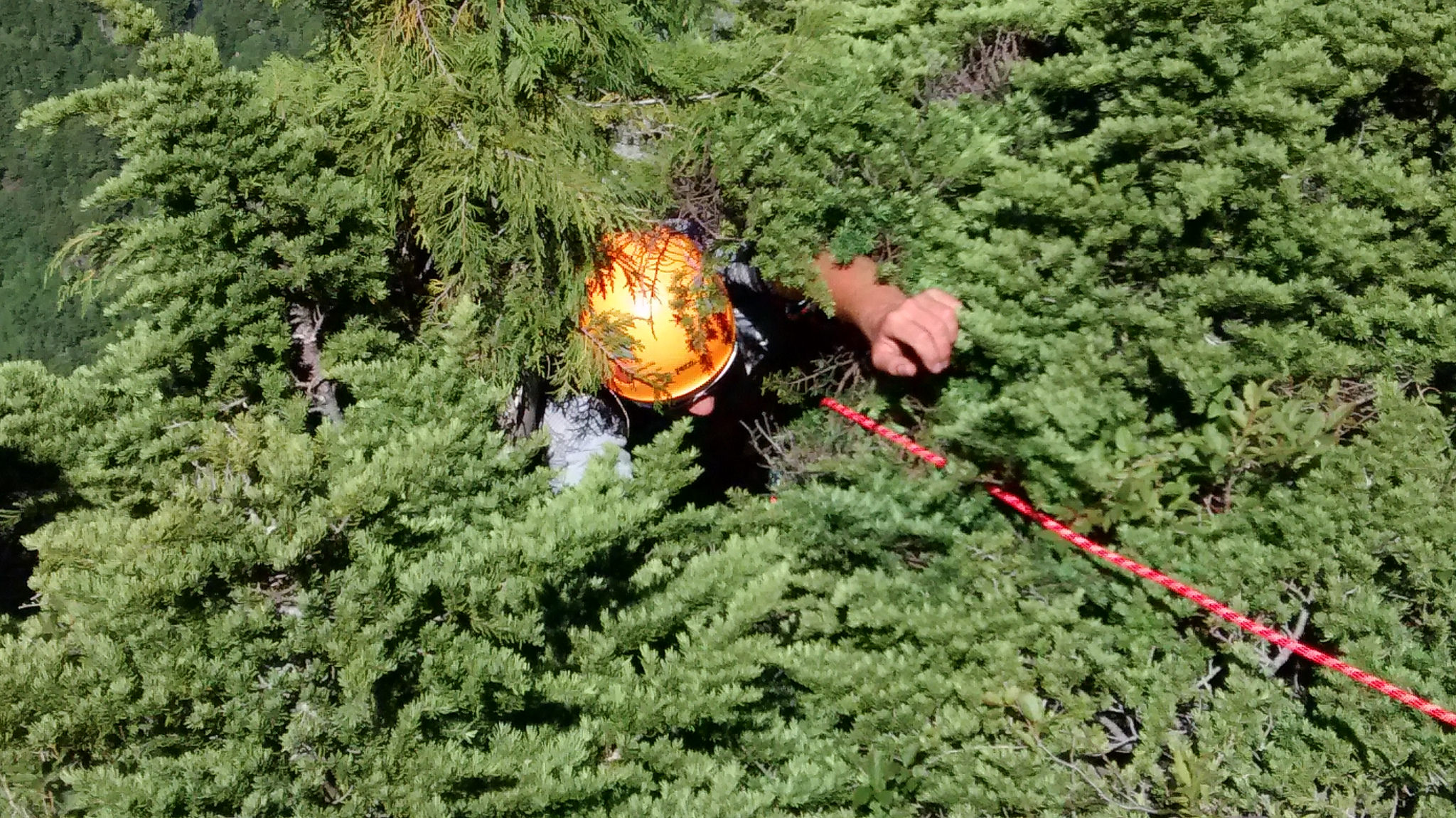 No animals were were harmed in the climbing of this pitch

From there we climbed the next bulge only to find ourselves in another notch. From here we rappelled down the gully to the snow slopes to the west. We took some time here to have a lunch break and melt some snow for water.

Instead of staying strictly on the North ridge of Blanshard Needle, we tended a little to the West. The climbing here is a little more exposed, but involves less bush. It should bee noted again that loose rock was a real danger. We finally made it to the summit of Blanshard around 5pm. From here we take a short break and begin the long trek back to the car via Alouette & the Evans col. 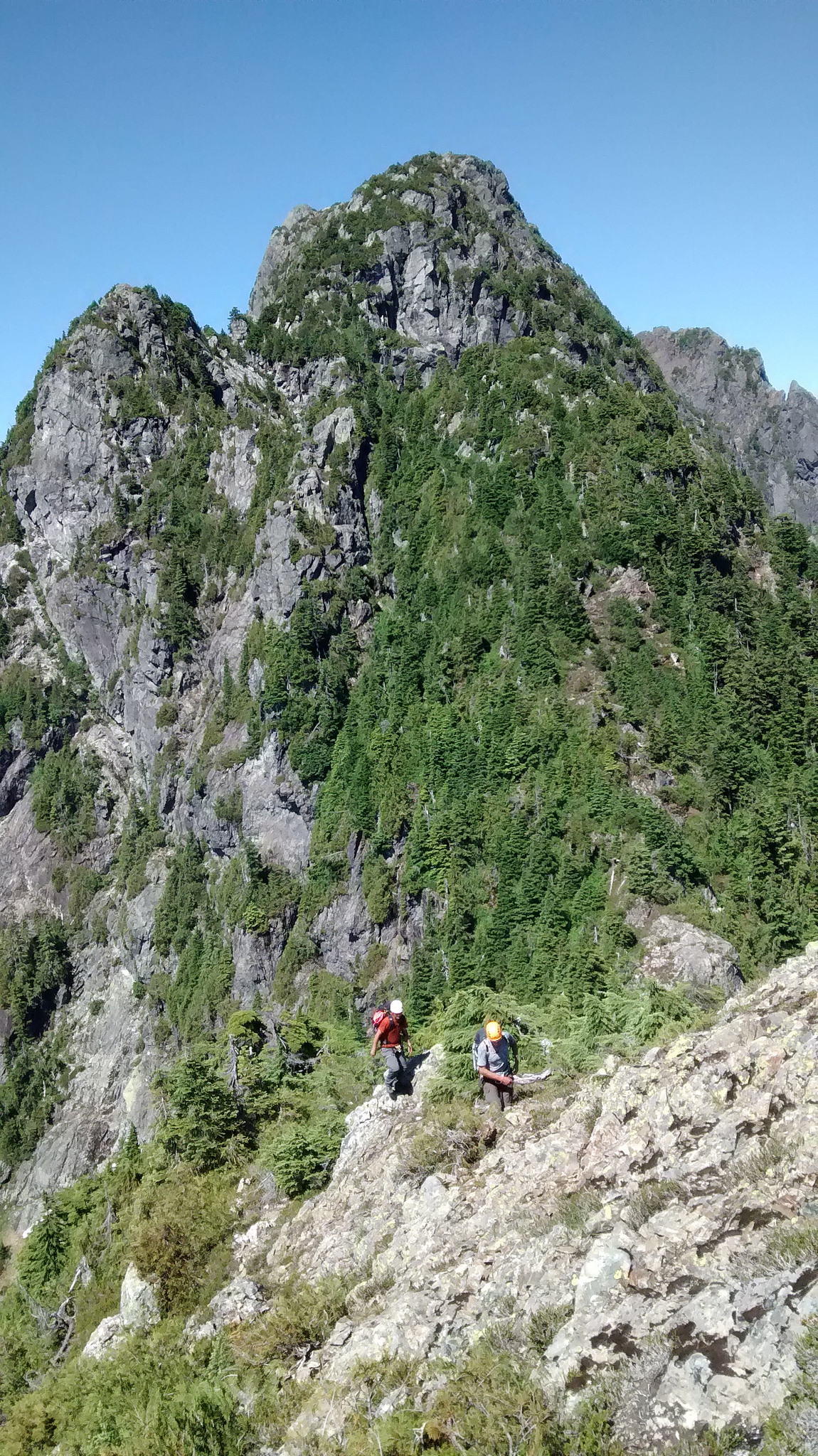 Overview of the steep and bushy climbing along the ridge

I brought an ice ax and this turned out to be a bad idea. It wasn’t useful and just got caught in all the bushes.