For the first time in my memory Dorothy asked me to go on a mountaineering trip with her. Normally the conversation goes something like this (from me to her):

At any rate, I don't know what came over her, but this time I didn't have to do any of that persuasion. It may have had something to do with the fact that the stroll up the West Ridge of Mount Harvey appears in the “103 Hikes in Southwestern British Columbia” book she has.

We woke up at 3:30 and met up with Neil and Gordon at Saint David's just before 5:00. A short drive north took us to the trailhead at Lions Bay, where we took up the last 2 parking spots—the parking was now full at 5:15! The next hour or two involved the long slog up the FSR to the beginning of the ramp. On the way there we spotted the ramp and noticed that it looked a little patchy, but figured we'd try our luck anyways. 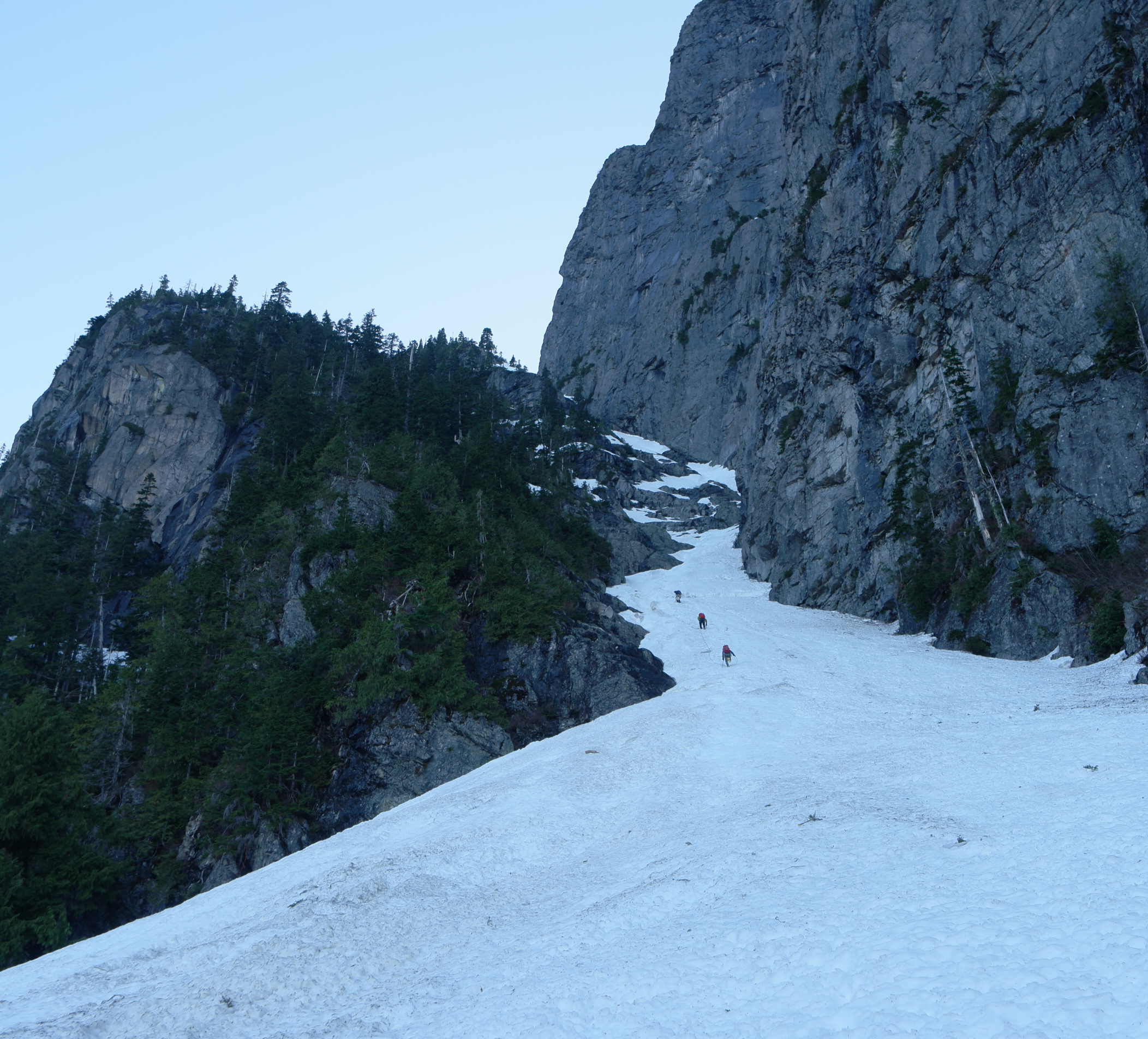 The start of the ramp

Neil had recently cleared the brush off the approach trail, making it much more enjoyable. By 8:00 we had arrived at the base of the ramp, put on our climbing gear, and finished our requisite pee breaks. The start of the ramp went pretty easy. There was a few moats, but they were easily by-passed or easy to step over. We were about 1/3 of the way up the ramp before we bothered to do any belaying. In some places the snow was a little patchy and sketchy, but mostly there was enough. 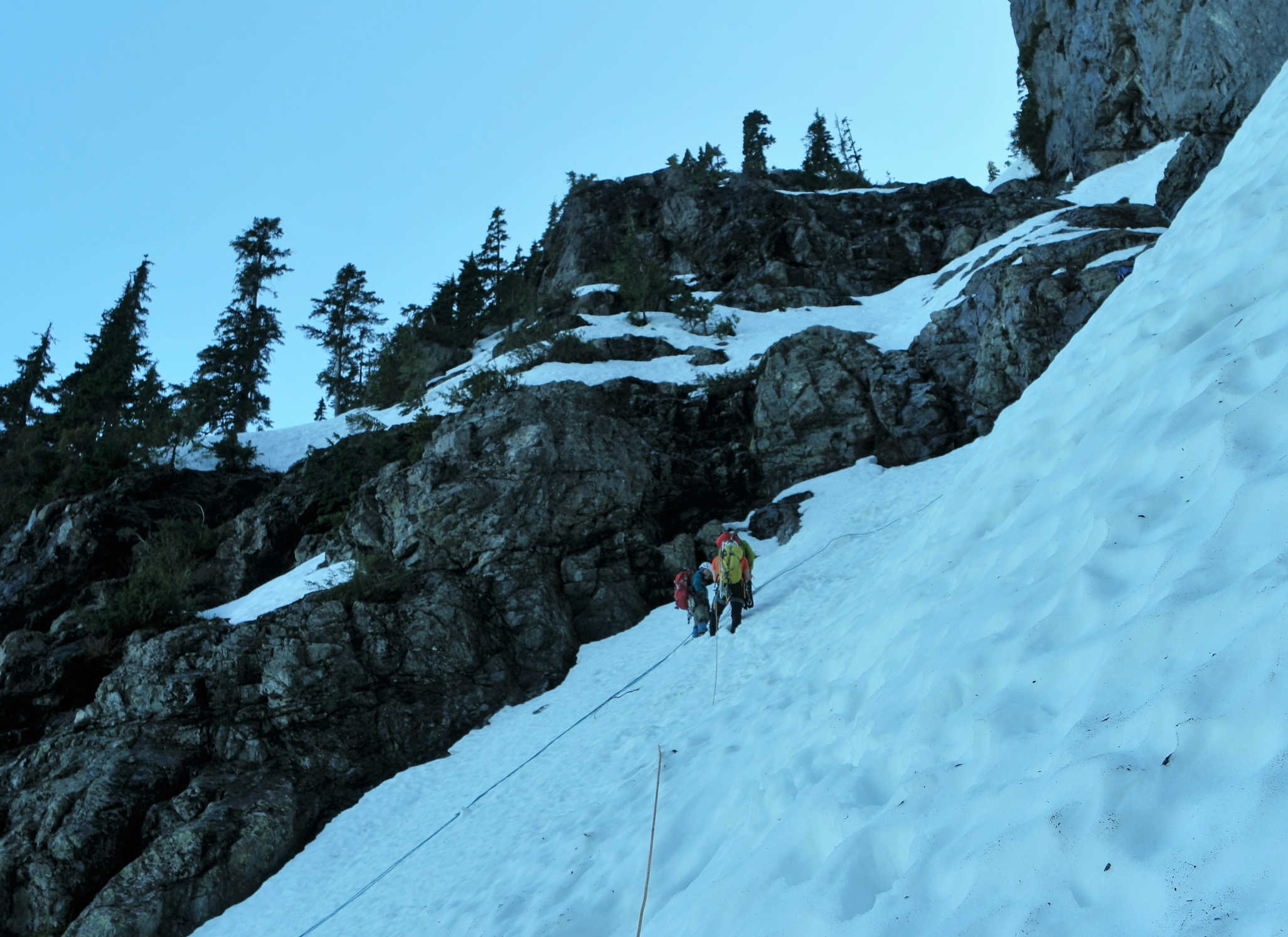 Waiting for space at the belay

The snow itself was quite nice: soft enough to get a good boot step without much work, and good enough for deadmans and mid-clipped pickets, but not much good for top-clipped pickets. The worst of the cornices seem to be gone too.

About 2/3 of the way up the ramp we came across an unavoidable rock band. From below it didn't look all that bad, but the rock itself proved to be quite difficult. It was wet and slimy 2 and pretty slabby. Most of what had appeared to be “holds” were down-sloping and not very confidence inspiring. Neil led through this section and the rest of us were given a belay. Fortunately there was pretty good tree/bush at the top for a belay, because the snow above was quite thin and soft, and not much good for a snow anchor. 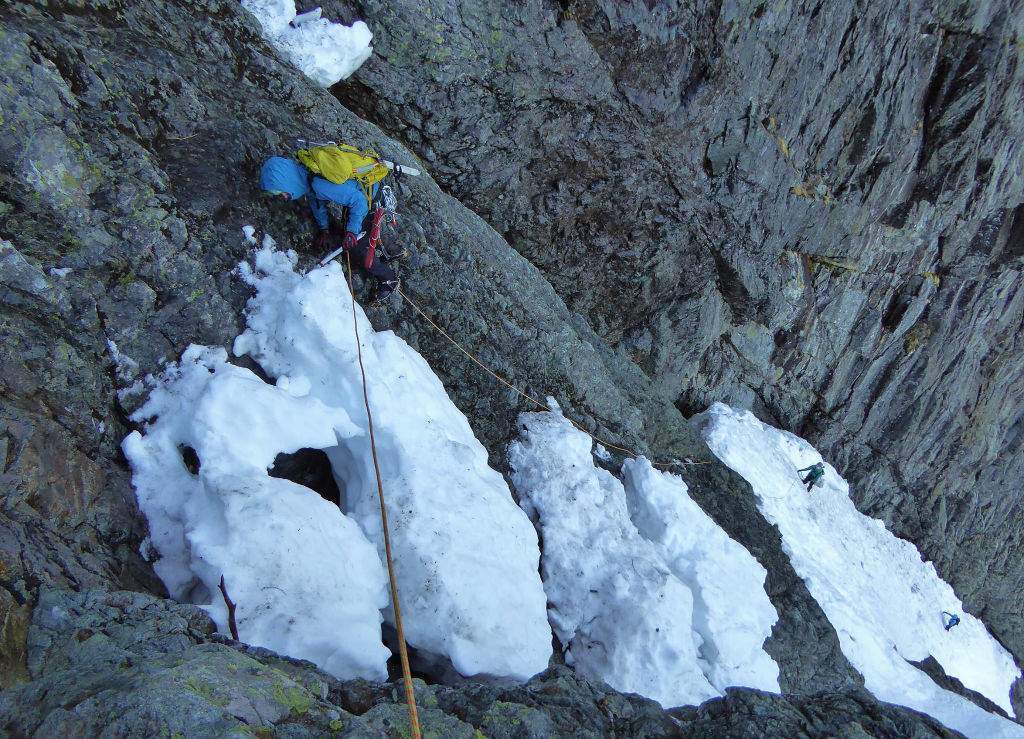 From here we gained the shoulder on the left side of the top of the ramp. The top of the ramp had another moat in it which I was not to eager to climb over. After our difficulties at the rock band, the traverse at the top went without any real difficulty. We then short-roped our way up through the krumholtz to the summit ridge.

We arrived at the summit just before 14:00 and had a nice long lunch break. We took summit photos, chatted about the nearby mountains, and worked on our skin cancer. The descent was pretty uneventful. We had pretty nice snow to walk down in until about 1000m, and then we bashed our toes the rest of the way to the car, arriving there about 17:00. 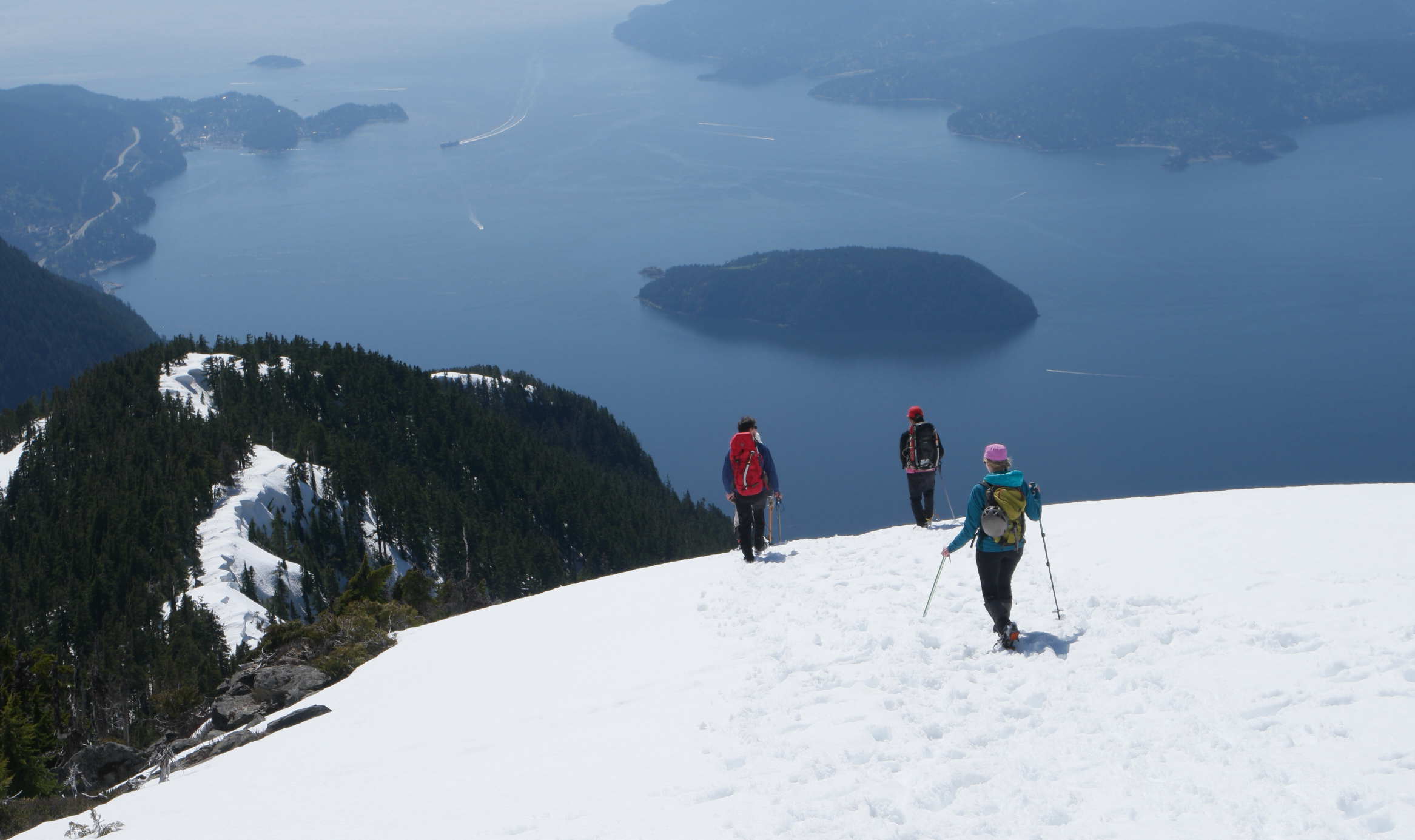 In other words: 12 hours

One person tried to climb it without crampons; she was not very happy